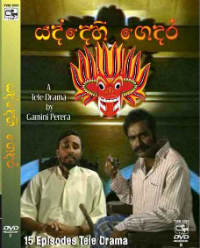 The story revolves around ‘Yaddehi Gedara Loku Bandara’ the chief occupant of the Yaddehi Gedara Walawwa. He comes to know about a hidden treasure in one of his lands and seeks help of Kapuruva, a black magician, to unearth it. However, Kapuruva has other plans. He is conspiring with Danel Mudalali to mislead Loku Bandara, sacrifice his son Randunu and get the treasure themselves. Kapuruva manages to persuade Loku Bandara to sacrifice Randunu. From that point on, Loku Bandara starts losing his mind and he kills the servant of his house doubting that she knows his secrets. It is too late when he finds out that he was fooled by two crooks. He manages to rescue Randunu’s life but he becomes disabled. After killing kapuruva and convicted for other crimes as well, Loku Bandara ends up in Jail.