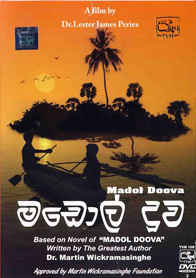 Martin Wickramasinghe’s novel Madol Doowa has been read and loved by many generations of children and adults. It is the story of two boys who run away from their village home, in fear of punishment for their somewhat boisterous escapades. They eventually come upon an uninhabited island in Koggala Oya, a broad and beautiful river in southern Sri Lanka. The story relates the adventures they share whilst they labour hard to farm and fish, and to make a home for themselves on an island covered in thick jungle. Despite the circumstances that curtailed their education, they confront and overcome the challenges that confront them.

The courage and determination that make Upali and Jinna the heroes of the story comes from their unyielding physical and mental strength. Upali overflows with an extraordinary, humane vitality.

Young Upali Giniwella (Ajith Jinadasa) is resentful of his new stepmother (Somalatha Subasinghe) and lashes out by committing harmless acts of mischief around the village. For this Upali is sent to a boarding school where he bonds with the headmaster (Joe Abeywickrema). He once again gets into trouble however and is returned home when a new headmaster installed.

Upali is punished by his father back home. He becomes more resentful and takes off with his servant boy Jinna (Padmasena Athukorala) to the island dubbed Madol Duwa. After some adventures there, Upali is found by a friend of his father. Upali learns that his father is sick and returns home to ask for forgiveness